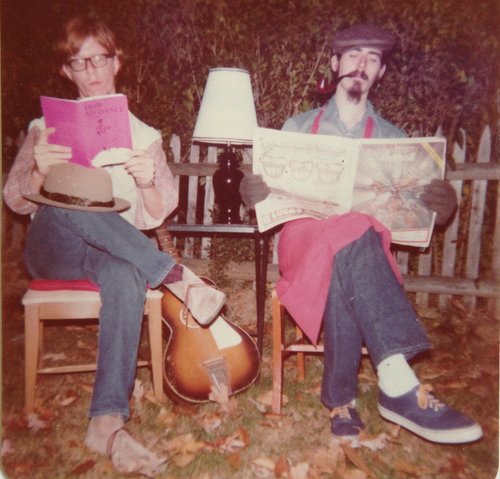 Common among the groups belonging to the so-called Canterbury scene in the early 70s was that they made music that seemed a bit haphazard and self-effacing, with lots of humour and a bit of friendly insanity for good measure, yet was simultaneously complex, inventive and often heavily constructed.

One of the few American bands with a strong Canterbury influence were the Muffins. They also displayed a very English-sounding lightness of touch that you do not easily find in American music.
And that is why listening to the newly reissued and previously tape-only “Secret Signals 1” is such a joy.

Here we meet up with the Muffins four years before their masterly Manna/Mirage debut. We have been there before, on the other mid 70s Muffins compilation “Chronometers” with which this shares several tracks – although the versions presented here seem a bit rougher and with more of a live feel.

The Canterbury jazz vibe is strong in these early recordings. And the humour is so disarmingly awkward it indeed manages to become a satisfyingly American counterpart to the Monty Pythonesque originals it seeks to emulate.
Maybe due to the fact that much of this release was originally designed as a reel-to-reel album, titled “Agar Squid,” it actually works as one. It isn’t as top heavy as the already mentioned “Chronometer” compilation, and although it might not quite live up to the quality of that release, the tracks are very nicely sequenced. For example, if you manage to endure the opening track, you can almost feel your soul lift as that is followed by the soothing “Brix.”

The fact that that the Muffins were already this incredibly close in the 1974-76 time frame to what their Canterbury counterparts were doing speaks volumes. There is synchronicity at play here, not just influence.
Still, you can not help but smile when you hear a track like “English” with its spoken “It’s time for tea” pronounced in such a distinct American accent that you are immediately convinced these guys never had afternoon tea.

All in all, an incredibly satisfying listen and one of the key reissues of 2017. Although I have never heard the original tape releases, there were two more in the same series, and they are also planned for CD reissue. Let us hope that they will be as great as this one!