Whereas their previous outing was directly inspired by early Soft Machine albums, Schnauser’s new “Irritant” scratches the same itch in a different way; it carries on the Canterbury influence in spirit rather than in form.

And there is a lot of spirit here. As always with Schnauser, the approach to music-making is one of reckless abandon. There are no worries what people might think.
If they never cared for or bothered about musical fashions before, why should they now?
Why play it safe when you can focus on “perverse musical and lyrical selections”?

So great British pop it is, scrambled perhaps, and distorted. But on the other hand if it weren’t, well then it would neither be great nor particularly British, would it?

With the inclusion of a sax player, the band is now a five-piece – and it certainly means Schnauser can prog out more in the instrumental passages. While I don’t mind that at all, the highlight for me is the songwriting – which is really all over the place while simultaneously sounding uniquely focused. Compared to earlier records, I hear a bit more of the sweet groove from Duncan’s wonderful wonderful Lord Gammonshire solo album. Meanwhile, Alan Strawbridge’s sense for a twisted melody is blissfully intact.

Another highlight are the voices. Spoken, double tracked, pressed to high pitch through the vocal cords, or just plainly sung vocals – they are all a great pleasure to listen to.

Instant classic – or another lost one? You decide. Gotta go, the phone has taken over my stereo and is ringing loudly! 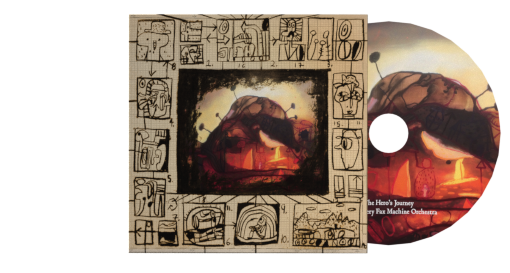 Martin White used to be in a band called Scarlet’s Well with Bid from the Monochrome Set. If you like either of those bands, you should treat yourself to “The Hero’s Journey” by Martin’s band The Mystery Fax Machine Orchestra.

Apart from being a rather hilarious band name, it quite exactly describes the music on offer. Nonsensical and very English but in an unusually maximalist way. Musically that means daft disco, constipated funk, jazzy interludes, music hall, 50s rock, orchestral workouts, narrated poetry – and some pop of the Nirvana “Story of Simon Simopath” type. Use anything you can: and when you can’t, cover it up with many words and much singing. All a bit (Mike) batty, but in a good way.

“The Hero’s Journey” – just like previous album “Master Flea” – is dramatised seemingly like a soundtrack to an imagined musical. The subject matter is Joseph Campbells hero monomyth, that is, the underlying template for all hero adventure stories.
Consequently, there is an abundance of far away places, magic, love, goddesses, beasts and adversaries to play around with in lyrics like “You need nine heads at least / to topple the beast / and get the lion’s share”. Perfect fodder for a musical narrative.

When I interviewed Martin some years ago he had a 9 to 5 office job, and I can imagine him whiling away the endlessly empty office hours in front of staplers, fax machines and other office paraphernalia as fictive musicals play out in his mind’s eye. In this sense, “Master Of Two Worlds” might be a key track on the album:

Just like the music, the production is also exactly what you could expect from the band name: expansive, flamboyant, even luxurious. If the Rutles sound like the Beatles, the MFMO sound like ELO; that is, first rate and classy also in those parts where it is intentionally tasteless. If you get my drift.
How on earth Martin manages to pull that through is beyond me, because, as far as I know, MFMO recordings are made on a budget that even cut out the shoestrings for cost reasons.

This album is a bit of a miracle, really. I have no idea where Martin and his mysteriously faxy friends find all the energy, or how they muster up all the silliness and sincerity needed for the herculean task of completing such an ambitious project.
One must be both foolhardy and brave to even attempt such a thing, and in that sense, I am starting to think of Martin White as one of my archetypal musical heroes in the monomythical sense. A master of two worlds, indeed!