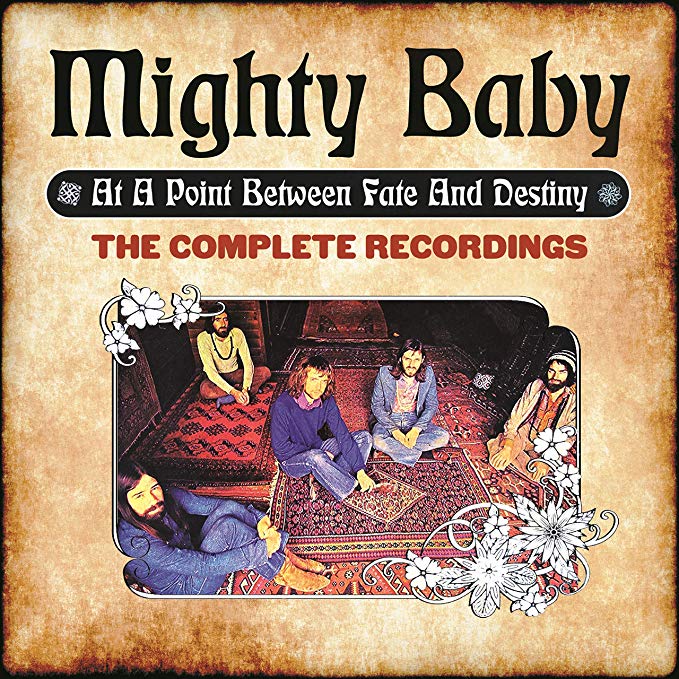 I vividly remember being at the Oakland Auditorium outside San Francisco on New Year’s Eve 1979, seeing the Grateful Dead. The cloyingly sweet smell of marijuana was thick in the air and I had a strange hallucinogenic experience at one point during the show; it literally blew my mind.

Given that we jointly entered a new decade that night, the feeling of being in that moment was quite tangible; and the music became a ritualistic celebration of time itself.

Still, no Grateful Dead studio album has given me that same vivid felling of the here and now. For that experience in recorded form, I would instead pick the eponymous debut from a band sometimes referred to as the Grateful Dead of the old world, namely Mighty Baby.

‘Mighty Baby’ really does sound like a captured moment in time. In fact, it sounds like right here and right now even today: light-footed and genre hopping, as inclusive in its warts-and-all sound as it is insular in intent, and presciently detached.

The Beatles spoke for a whole generation and so did punk. Today, musicians tend to speak only for themselves. So did Might Baby; and in this they were fundamentally different from the Grateful Dead.

Then again, if you were to ask me what the music of the future sounds like, I would actually pick Mighty Baby’s sophomore effort, ‘Jug of Love’. On this album, they develop a sound that is as organic as it is fluid. While they obviously followed the Byrds’ lead into the country, Might Baby added a deeper jam band level that, while maybe technically comparable to what the Grateful Dead were doing, took a much more introspective musical direction.

After spending the 80s and much of the 90s with synths and machines, as we entered the new millennium, music increasingly seems to have no other way forward than to turn away from artifice and back to humans. What does it sound like when musicians understand each other? Listen to “Jug of Love” and you will know. Here is the sound of something very handmade and spontaneous, yet excitingly interdependent and complex.

Having said that, as an experiment, the album stumbles at times, in particular on the bluesy and slightly pedestrian ‘Keep on Juggin’’. Here, Mighty Baby really do become something of the Grateful Dead of the old world. (Indeed, as documented on the concert recordings, ‘Keep on Juggin’’ was a live favourite….)

In any case, after having produced the ultimate buried treasure of the 1960s as the Action with ‘Rolled Gold’, Mighty Baby rose out of the ashes and made what might be one of the most forward looking bodies of work of the 1970s. Now on ‘At A Point Between Fate And Destiny ~ The Complete Recordings’ released by Grapefruit, you get to explore their two groundbreaking albums with a massive set of contextual recordings.

If you want to know how reissues should be done, you need to get this regardless of your musical taste; firstly because it contains unreleased material than what was previously available, and secondly because it tells a unique band story.

Let us start with the music. You get not one unreleased album here, but two. First up is the original acetate version of what was to become the debut, consisting of not only previously unreleased mixes and versions of tracks but also a pair of highly worthwhile additional songs, namely ‘Ancient Traveller’ and ‘Messages’.

The second album was advertised as *The Day of the Soup’ in June 1970 and intended for release in November that year but never appeared. Now we get to hear the recordings; they turn out to be sketches of what was to come rather than fully completed tracks, but nevertheless highly interesting.

There are also a number of live sets of varying sonic quality. And while the live band does come across as a bit meandering in places, their determination not to compromise in their focus to let the music itself take them on a journey shines like a firebrand throughout, making the time spent listening worthwhile.

Then we have the story of the band. It starts with a recap of their time in the Action and continues with how their new identity was formed when their one-time roadie John Curd – who made a career out of van rentals and then started the record label Head – signed them in order to recover money they owed him for van hire. Simply put, Curd wanted to make money out of them and christened them Mighty Baby since he thought bands should have names with contrasting associations like the Grateful Dead or the Soft Machine in order to be remembered.

But what follows is not a story of a mighty money maker but of a band that increasingly found themselves at odds with their rather drugged-out audiences as they gradually converted to Islam – with the title of their second album even being a Sufi metaphor for divine love – and started observing strict abstinence from both drugs and alcohol.

In that sense, this is the previously untold and quite tragic story of a band that eventually played themselves out of existence.

To sum up, a mighty reissue that delivers on every front. It works as well for first-comers as for longtime fans of the band. I wish all reissues were like this!