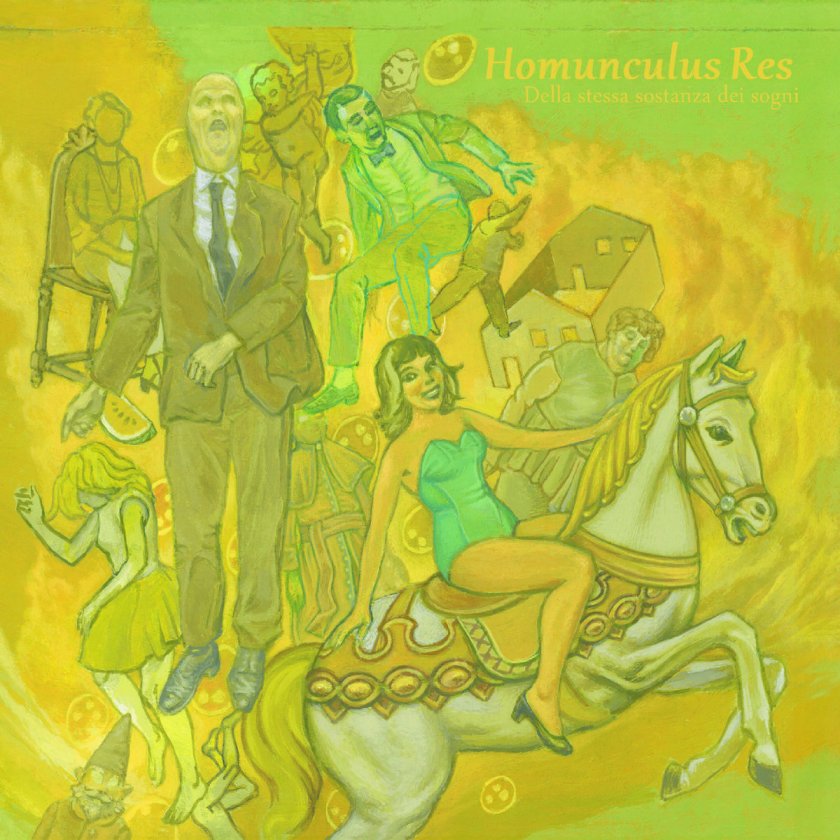 “Della stessa sostanza dei sogni” is one of the most anticipated releases for me this year, and now it is here! This is the third album by Sicilian art rockers Homunculus Res.

They are generally seen as being the second coming of the Italian Canterbury sound, roughly taking over where Picchio dal Pozzo left off in 1980. But while it is true that they belong to this tradition, they have transcended their influences and are clearly making music for the future rather than the past.

They are still mixing components of jazz, Canterbury prog and RIO, but the pop influences of what I imagine to be cheesy middle-aged entertainers on Italian TV have grown.
Having said that, they have not abandoned their inspirations. When they suddenly and briefly sound like “In the Land of Grey and Pink” era Caravan in an instrumental section of “Se la mente mentisse” my neck hairs literally stand on end.

The songs on this album go in bewilderingly many directions. “Della stessa sostanza dei sogni” translates roughly into “Of the same substance as dreams” and just like in dreams, seemingly unrelated pieces flow naturally into each other. In fact, the juxtaposition of weird time signatures with wordy vocals in a range of voicings becomes almost hypnotic. At least if you, like me, don’t know a word of Italian.
Although two tracks have female vocals, band leader Dario D’Alessandro fools around a bit with his vocal approach on other tracks. For example, I could have sworn that the main vocalist on “Il nome di Dio” was an American, but that seems not to be the case.

Speaking of Americans, Dave Newhouse from The Muffins is contributing saxophones, clarinets and flute all over the place. You first notice his wonderfully unhinged sax part on “Faccio una pazzia” but then realise that his contributions lock in with all the other wind instruments for what is really a key part of the band sound.

Other notable guests here include Petter Herbertsson who plays many of the instruments on the lovely “Rimedi ancestrali” and Rocco Lomonaco from my other favourite Italian band Breznev Fun Club. Rocco not only provides his signature orchestration skills on “Bianco supremo” but also contributes the only composition not penned by Dario, “Preludio e distrazioni”. And that is two minutes of pure genius right there.

“Della stessa sostanza dei sogni” completes a magical trilogy where each consecutive album not only takes a step further but also makes each previous album grow in stature as a result.
This is the point where Homunculus Res becomes one of the few bands whose reputation is set to grow exponentially over time – just like Picchio dal Pozzo, The Muffins and Caravan before them.